“Alone we are Smart. Together we are Brilliant.” This holds picture perfect for carrying out a comprehensive and well covered testing of any software application. And that is where comes in Pair Testing, which works with two professionals sitting right next to each other, all ready to test the software. The prime approach of Pair Testing is that the same thing should be tested at the same time and same place, with constantly exchanged information.

Today, with the growing complexities of the apps and the wide geographical spread, software testing companies are getting all the more conscious about the fact that testing is no longer a secondary job to be performed by testers alone just before the user acceptance. It is now being treated as a parallel effort to be put in by developers, testers and business analyst alike right from the conception of the project till its implementation. End users are also highly aware of the importance of software QA services and insist on a disciplined and state-of-the-art approach for it. 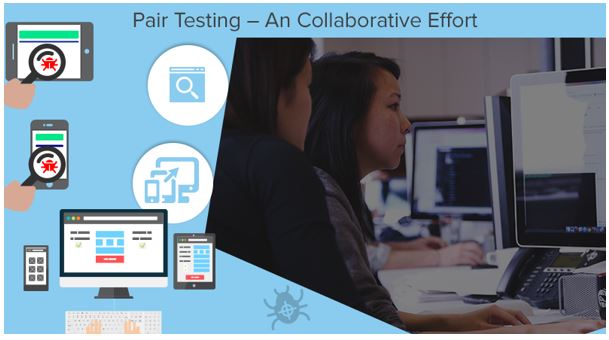 How does Pair Testing Work?

Pair Testing focuses on two people, both of which fall under the category of either a developer / analyst, tester or, of course, both being different categories. Followed diligently by software testing companies worldwide, this process involves 2 team members who follow their own set of responsibilities based on their category and approach testing plans with well defined set of guidelines and purview, to each their own. Assumed to be a probing testing style, it involves a lot of discussion, idea exchange between the duos, sometimes at peace sometimes causing friction, but whatsoever it may be, it surely yields a robust and quality rich output. It is not for execution of test cases and test plans and surely does not act as a substitute for other methods of testing, but is a sure shot value addition to the entire development and testing process of the project.

In this style of testing, one person has to be from the testing team but the other could be a developer – who knows the coding style in and out or a business analyst – who understands the requirement precisely but the best would be a resource that has both, knowledge of the code as well as the need. Both these team members tend to compensate and complement each other.

Why is Pair Testing Highly Recommended by Software Testing Companies?

What usually happens when the testing team alone handles the show, is there are repetitive and monotonous set of views that handle the entire testing process, because of which there are sure shot gray areas that remain unattended and act as a hurdle later. In this type of testing, because of involvement of a non-tester and that too, someone who knows the system in and out, there is a novel perspective that shows up and gives the software a quality shot. It also gives a critical angle to the entire testing process, which otherwise, may be sidelined.

Because there are two resources involved and that too, from diverse sections, with the same goal of utmost customer satisfaction and a high end acceptance by the user, there is a advanced level of validation which is experienced and that brings along increased sturdiness in the project. Even while the errors are being identified, compiled and treated, there is dual monitoring, ensuring no loop holes within the process.

Since both the resources, the developer / analyst and the tester are well versed with the entire system, as soon as a bug is identified, together, they can easily relate to it and with harmony, come to the root cause of it, with no difficulty. Both team members work together facing each and every challenge that comes its way, as a team and this yields a lot of communication strength both to the resources as well as the project.

Since its sheer team work that this model works on, there is a increased harmony and togetherness between team members with increased understanding and a stronger working culture, all set to face the intricacies of the project together. This breathes in fresh vibes of optimism and friendliness into the entire project, which is the fundamental base of the success of any project, be it software or non-software. A continual exchange of ideas, information transfer and work harmonization is the desired output.

As always, more innovativeness more challenges. That is what happens in this case too. However rosy and picture perfect Pair Testing looks; there are a few tough patches teams may have to encounter.

For Pair Testing to work fine, the best way is to create a highly conducive environment which is suitable to both the stakeholders so that there are least chances of any troubles getting created. Software testing companies have already taken this as a part of their regular testing regime and it is gaining popularity worldwide.