Development teams and Testing teams have long remained at locked horns with each other for responsibilities related to software quality. Of course, the only reason is incorrect and insufficient planning at the software conceptualization phase. Various software development workflows have evolved in recent years to closely integrate software development with testing as a continuous and ongoing activity.

Extreme Programming or better known as XP programming is ready for Agile Testing adopted by software testing companies to integrate with software development. This method is focused on business results which remain dynamic to suit customer expectations at all times. It adopts the approach of continuous testing with immediate modifications and improvements as required.

The entire development team along with the QA teams is responsible for the quality of the software. An amazing solution drawing out the best from both the testers and the developers tightly integrating their skills, complementing each other to deliver promising software testing services.

The name itself derives from the fact that it pushes the Testing and Development practices to extreme levels of perfection to achieve the desired results.

Test Driven Development promotes repetition of very short development cycles where test cases are written with an aim to improvise a functionality. The code is put to test and refactored or corrected repeatedly unless it passes the test.

In XP, CI is used in combination with repeated automated unit tests written through practices of test-driven development verifying them continuously before integrating with the mainline. 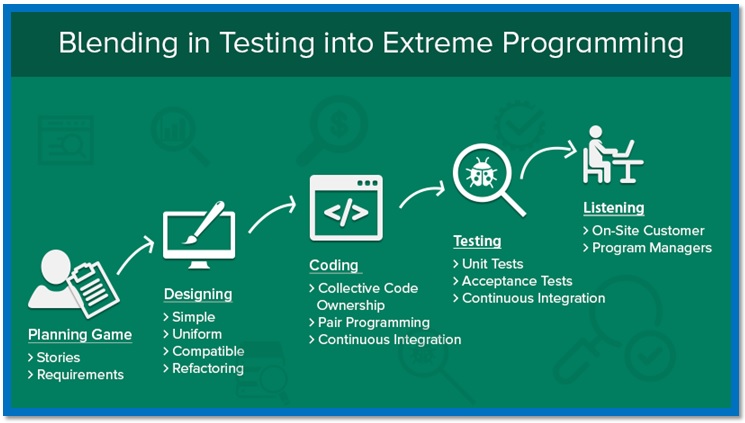 The planning game is integrated at many different levels with an aim to allow the enterprise core teams and the development teams to work seamlessly together to generate business value for further benefits. Once the list of requirements and the features needed to satisfy these are identified, the Developers estimate the time requirements and the details of the teamwork. The schedules of implementations and priority lists are prepared in close co-ordination with the enterprise needs.

Designing is the first step for any iteration of XP Programming. This innovative design ensures uniformity in coding styles and formats for compatibility across different team members by using metaphors and naming conventions for components like classes, objects, and methods.

Software Class Responsibilities and Collaboration cards are used to allow developers and other members of the project team to exchange ideas and suggestions integrated with the object oriented approach.

This Design style also promotes smaller units of code to provide solutions for problems, to reduce the risk that comes with making changes to the complete system.

Refactoring techniques are implemented with an aim to improve source code maintainability and readability. This is helpful in implementing changes during tests.

Coding is the backbone of the XP Programming Life Cycle and ensures that the testing philosophy is integrated into this step as a continuous exercise to offer better software testing services.

Coding is focused on developing the code based on collective code ownership and adhering to the predefined metaphors and standards. Pair programming is followed where two programmers work on the same machine with an aim to produce superior quality of code.

It is also ensured that the efficiency and productivity of the programmers remain at their best by strictly following the 40 hour work weeks and no overtime under any circumstances It goes without saying that continuous integration is observed and the code hence is tested and conflict-free at all times. 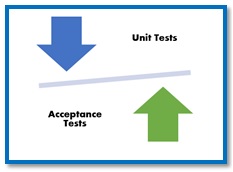 Extreme program integrates testing with the development phase itself rather than indulging in retrospective testing, making the workflows of software testing companies easier. Extreme Programming combines two types of testing to make the testing phase foolproof and comprehensive.

These are automatically generated tests by the developers to test the functionalities as and when they are written. The unit test typically tests only a single component like a class. They are written using unit testing framework.

These tests are built around the specifications given in by the customers and they test the entire system. When all the tests pass for a given feature, the story or the requirement is cited as complete. This test can be manually run as well as automated as per the discretion of the QA teams 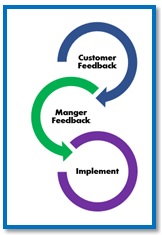 Listening to the Customer, an innovative measure to keep a constant feedback cycle on, is aimed at constantly keeping a check on the customer expectations fulfillment. The developers receive feedback from the project manager as well, besides the customer.

Customer feedback is integrated with the Acceptance Tests and the requirements or stories are constantly revised at the end of each test.

There are mistakes that XP teams make and should be consciously avoided at all times.

Extreme programming is a software development ideology based on simple designs, constant communication and feedbacks and the acumen to listen and rectify the problems instantly, with an aim to improvise the accuracies of the software testing services. It works towards bringing developers and testers together with simple practices and workflows and keep development and testing in tune with each other at all times.

Request a FREE POC to Test Drive our services.