The importance and seriousness of Software Testing is well known. Much has been discussed and evaluated and the bottom line is that mistakes happen generally because humans tend to overlook possibilities and probable errors. A software not tested with due seriousness can lead to major blunders putting the clients of the systems into a tight spot and resulting in nightmares of sort. It is then only prudent and wise to analyze and predict errors and conduct timely rectifications to avoid any embarrassing situations in the future and to deliver a stable and reliable system.

Like many other things, there are Myths surrounding Software Testing Services, but Facts remain Facts. 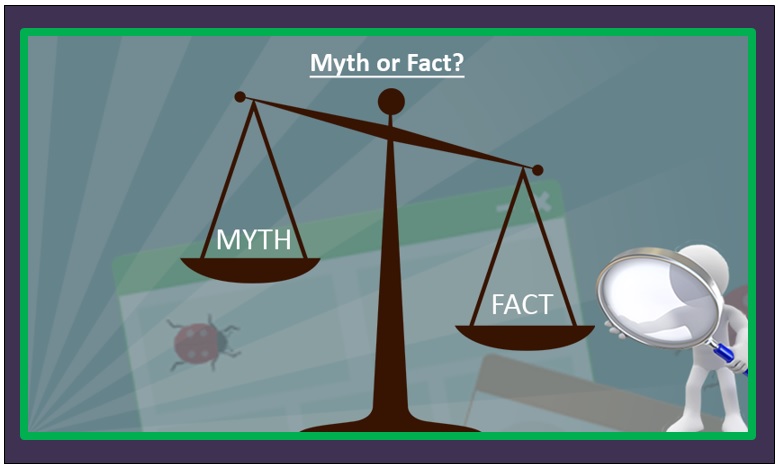 As they speak: “If you do not want to pay for testing efforts during software development you will have to pay for technical support and corrections after the product is released”. Early testing helps to save software maintenance costs.

Testing is waste of time

The testing itself is carried out concurrently with software development; therefore it is unreasonable to think that namely testing is a time-consuming procedure. The truth is that repair of defects found during testing requires time and effort.

Testing is only done when the product is fully developed

Testing depends on the written code. But, still it is necessary to test software requirements and create test artifacts and both these procedures can be carried out prior to release readiness of the final software product.

It Is Possible to Do Exhaustive Software Testing

It is really not possible to say that the testing is 100% and that all the bugs have been anticipated or fixed. The fact remains that most of the problem areas be predicted through testing but a complete testing of the system is really a far-fetched possibility. There could be certain conditions and scenarios in the system that never get tested in reality, simply because the system never reaches these.

The objective of Testing is to find and uncover as many bugs as possible. Identifying all of them is not possible, let alone getting rid of all of them. It is a myth to believe that even modern day Automated Testing tools can make the software 100% bug free.

A Missed Defect is the Tester’s Fault

Evaluating all possible loop-holes in Quality is the joint responsibility of the Designers, who need to put forward the scenarios of the system exhaustively; the Developers, who need to abide by the rules and standards set; the Testers to put all this together into perspective and check for all the uncountable possibilities and indicate corrective actions.

Quality of a Software is the Responsibility of Tester Alone

Again this is one of the most common Myths when it comes to Testing. The blame game that follows when something goes wrong is not only completely unprofessional, it is uncalled for. The complete team is responsible for the Quality product. The Software Testing teams ensure that the Quality standards are adhered to during the development of the product. The QA teams also indicate the problem areas to the Development teams and it is their joint responsibility to fix the problem and release and error free software.

Complete test automation cannot be achieved. Manual Testing, to some extent, is always needed, especially when it comes to relying on human acumen. It is the responsibility of the QA and Testing teams to evaluate the requirements of the system vis a vis Manual or Automated Testing.

Generally Automated Testing tools are the best when it comes to rigorous, repetitive and mundane tests in large volumes; while the tests with a lot of judgement and finesse are best done manually.

The Job of a Tester Lacks Creativity

Tester should have in depth domain knowledge to predict and find problems in particular software. It requires a lot of creativity and imagination to foresee issues and put associate them with each other and into the system flow itself.

Testers are expected to have the knowledge of the complete working of the software, the dependencies and the impacts of each module. Formulating test approaches, designing tests, and executing tests are more than creative process.

Myths or Facts, it is the onus of all the teams together to make or break the software as far as Quality is concerned. What matters the most is that the delivery is error free and does what it intends to do.

An appropriate and prudent test strategy is the call of the day today. SPEC INDIA Software Testing Services ensure a right mix of Manual and Automated Testing and provide support through the Testing Life Cycle. The unbiased test reports help smoother implementations with near zero post-delivery defects and higher customer satisfaction.