Test Less, Test Smarter is the jargon today. With web app testing services being an integrated phase in any software cycle and that too, right from its inception – thanks to the modern day agile approach that promoted testing to be involved in each and every phase of the project so as to pick up discrepancies early in the project, leading to increased stability and customer satisfaction, the need for testing the compatibility of the software amongst diverse functional environments is a must. With software QA services being an important ingredient in software development and the increasing pace at which technology is advancing, the variety of computing frameworks, browsers, OS, architectures, devices, hardware is also widely increasing and that is where the role of compatibility testing plays a very important part. In order to ensure quality, reliability, delivery and of all compatibility, it is essential to follow certain stringent norms of testing cycles be it any type of project, domain, system or infrastructure.

If we look at the web world, this is a significant rise in accessing websites with a variety of devices such as phones, tablets, laptops, desktops and with different browsers and operating systems. It is a must to have a user friendly and seamless application in terms of performance, UI, navigation, security and accessibility. 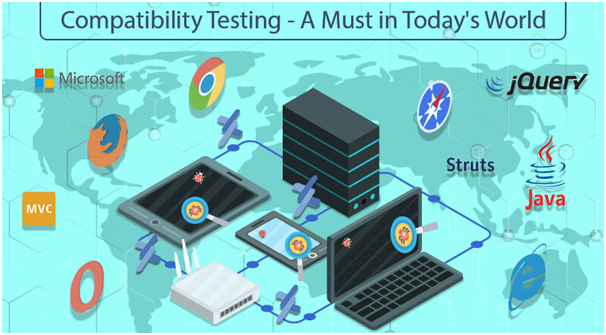 Looking at it generally, compatibility hints towards the capability of living and working together amicably and seamlessly. The same meaning goes on for software compatibility testing, an inseparable part of any kind of third party web application testing services. Amongst the huge assemble of diverse setups, what is of most importance is complete client satisfaction and that can be achieved the best with a thorough round of compatibility testing. As known popularly, software quality assurance is the apt key to overcome IT challenges faced by organizations. In the similar taste, compatibility testing proves to be the best choice for organization to rest assure of the software performance irrespective of its changing environment, since after all, it is the organization’s accountability to ensure accurate and flawless behavior by the application in view of any type of surrounding.

The reason why this novel testing style is getting popular is that earlier, the development and testing teams used to test the applications in a single environment and release it to the client for user acceptance, not knowing the reaction of the application to the end user’s infrastructure. Would it ever be appreciable to have our customer face numerous difficulties implanting the application on their desired environment? Isn’t it the service provider’s responsibility to well ahead, test the app on a variety of devices, browsers, operating systems etc.?

On the whole, following are the wide range of testing types that fall under this arena:

Since there are a huge number of devices having a variety of resolution, OS and specifications, it becomes difficult to cover them all in the stipulated time frame with limited costing schedules. That is where there could be chances of some type of bugs still lying in the application, which unfortunately may crop up in front of the client.

Occurrence of any bug or error in a particular type of environment is manageable but there are all chances of its reoccurrence in the other types of entities, which may turn out to be difficult to manage while testing of the software.

In order to be full proof, it is essential to test all compatible entities completely even if there is occurrence of the discrepancy only in one of them. That seems simple but when it is actually to be done, it comes up as a huge demanding task in terms of money, time and resources.

With huge environments to test, it becomes a complex task to determine the order and sequence in which this testing should be done and that surely makes a difference in the desired output and hence has to be worked out quite cautiously.

While testing, there are chances of unavailability of certain types of OS, devices, frameworks, hardware etc. In that case, organizations need to depend upon emulators, which may not turn out cent percent trustworthy as compared to actual device testing. In such cases, it becomes a bottleneck for testers to certify their application as completely testing product.

With a stringent focus on quality and processes, we have been implementing several web app testing services in a multitude of technologies. Visit http://softwaretestingsolution.com to request for a Free POC to test drive our services.