Software testing remains shrouded by myths and facts since its early days. It used to be a normal tendency during system development cycles and software quality assurance failed to get enough attention by the developers as well as the managers; as projects were executed with ‘test last’ approach.

Developers and Testers refrain from seeing each other as a nuisance and realize that the surest way to make the software work properly is to conduct tests in close co-ordination with each other as a poorly tested software means brand injury, competitive threat or even revenue loss for the company.

A prolonged development cycle or a shortened testing cycle ultimately means a misalignment amongst the development teams and the testing teams resulting in two major problems, inferior quality of software and also poor estimation of resources.

We come face to face with the Agile testing methodology today, which is a ‘test first, test continuously’ approach. Agile testing reduces all such risks and also gives an appropriate and workable solutions that help the company attain the technical as well as business goals.

Increasing the Effectiveness of Testing by Agile Testing Methodology

The software testing team is convened as a cross-functional team, with a good mix of people with capabilities of testing and business expertise. The overall project is better defined and chances of delivering a superior quality software get closer to the perfect percentage.

The Modus Operandi of Agile Testing 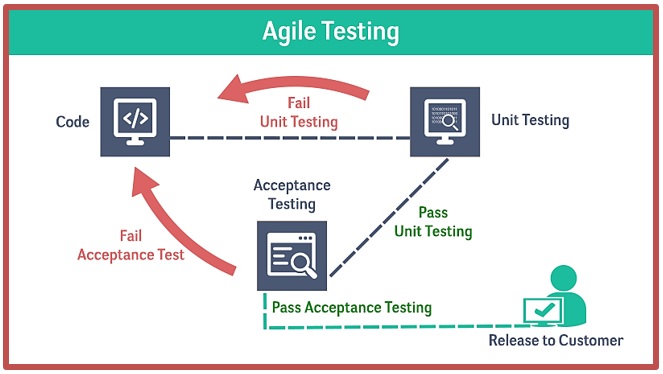 An Agile development team includes Testers and Software Quality Assurance Managers as important members, and they are considered as active contributors in planning as well as requirement analysis. This makes every team member responsible for the quality as well as final result of the product.

Words of Caution for Agile Testing

Agile testing methodology turns out to be of tremendous help to the projects that have a clear scenario, it is not beneficial if the ultimate goals of the requirements are not certain. With hazy requirements, the changes in requirements would definitely turn into nightmarish conditions.

One of the most critical components of Agile testing is automation, as without that it would not be possible to keep up with the development schedule.

Agile Testing is usually predefined by the whole team at the onset of the project along with the exact components that would be tested using automation. As automated testing and areas where it would be deployed are predefined, the team also prioritizes how to handle the bugs identified during the testing.

Automation works better than the traditional test cases in approaches like continuous integration, integrated test execution and automated deployment. These tests consist of unit tests that are capable of testing the most intricate portions of the software making it possible to test the product multiple times per day or even more frequently if required; with better accuracy.

An appropriate and prudent test strategy is the call of the day today. Software Testing Solution ensure a right mix of traditional and modern Testing approaches and provide support through the Testing Life Cycles. The unbiased test reports help smoother implementations with near zero post-delivery defects and higher customer satisfaction.

Visit and request a FREE POC to Test drive our services.