Automated Software Testing Services is a big ocean in itself. With numerous techniques and multi-faceted tools to support, the testing framework and environment are all dependent on certain pre-defined steps, methodologies and structures, based on which the processes are performed. It is a very well observed fact that at certain times, if your tend to do testing with a lot of pre-definition and perfection, there are chances of missing out on the random reactions or unplanned actions, which are equally important when it comes the actual performance of the project. That is where Ad-hoc testing plays an important role. It is a highly effective technique for system testing barring any advanced planning of test cases or test documentation. With no limitations and no documentation, this is a free style of testing done by testers with their own creative tints and perception to extract the unseen flaws in the software. In the arena of Software Test Automation, the main objective behind Ad-hoc testing is to discover defects or errors that cannot be caught through traditional or recognized processes followed during the testing cycle. 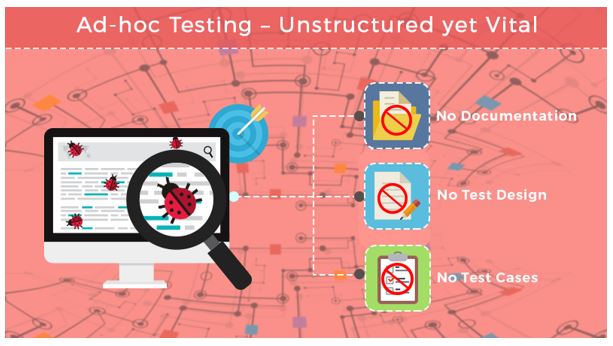 When is the Apt Time to Perform Ad-hoc Software Testing?

There are situations when the testers face a highly restricted time to test owing to different circumstances like budget, timelines, infrastructure etc. At such times, Ad-hoc testing comes to the rescue by offering the creative knowledge of randomly checking the software. With a popular technique called ‘Error Guessing’, this style involves a testing group which are experienced enough to guess in advance, what possibly could be the flaws in the system, by observing the pre-requisites needed.

In Software Quality Assuring Services, where there is lack of testing documentation like test cases, test plans etc., Ad-hoc testing is the only way out. There is no need of any planning, process or documentation wherein no defect is mapped to any test case and hence the tester is free to cull out as many bugs as possible.

There are certain projects in which there are a lot of complex scenarios with a variety of requirements, implementation complexities, geographical challenges etc. In such cases, when we follow only pre-determined steps and testing procedures, humanly, there are chances of neglecting or over-looking certain conditions which will crop up only when they are randomly tested. These defects will surface in situations with no documented steps.

With its pros and cons, this innovative style of testing does bring with it, the tester’s creativity and satisfaction, which surely gives out positive results. If used appropriately at the perfect time, it is sure to yield good results.